In 1970, conflict defined the relationship between generations. As students elsewhere took to the streets to protest, a few in St. Gallen took a different approach. More than half a century later, the conference they started is still going strong. In May, hundreds of International Student Committee Alumni gathered to celebrate the St. Gallen Symposium’s 50th anniversary.

In 1970 the St. Gallen Symposium took place for the first time, and was due to celebrate its 50th anniversary in the spring of 2020. But – as it did so many other things – the coronavirus pandemic disrupted those plans, too: the event waspostponed entirely in 2020 and held in a hybrid format in 2021. It was only this year that the 50-year-anniversary of the symposium could be celebrated in person, a special occasion that brought together more than 460 alumni of the International Students’ Committee (ISC), the organising body of the symposium.

More than 50 per cent of this community, including representatives of 48 out of the 50 former organising committees, signed up to attend, a tremendous turnout testifying to the deep bonds among the ISC community. Arriving from 15 different countries, they all gathered the Saturday after the symposium at the SQUARE, the University of St. Gallen’s brand new learning centre opened only three months ago. This modernist glass structure, designed by Japanese architect Sou Fujimoto, was the venue for a relaxed brunch in the morning and a festive dinner in the evening. Debate over a New Generational Contract, hiking in the Appenzell Alps or a taste of St. Gallen’s beer culture were on offer to round out the program.

Among the alumni present, Christoph Loos, CEO of the multinational power tool manufacturer Hilti, remembershis time as part of the 22nd Organising Committee as the activity that, in four years of university, taught him the most. “I matured and picked up a number of skills and self-confidence that, in a normal student life, I would not have,” Loos says. Christian Sutter, president of the ISC Alumni Commitee and member of the 46th and 47th Organising Committees, recently co-founded the app “Mympact”, measuring the carbon footprint of purchases. He calls the ISC a “school of life”: it’s where he met many of his business partners, and he considers it one of the reasons for his post-ISC success.

At the centre of the alumni gathering was Wolfgang Schürer, who founded the St. Gallen Symposium and the ISC in 1970. At the time, student-led riots had spread from France to other European countries, including Switzerland, as a protest against the conservative social establishment, while in Czechoslovakia, the brief period of cultural liberalisation known as the Prague Spring was crushed when Soviet tanks came rolling in.

It was an era when the generational divide seemed insurmountable, and the concept of a cross-generational symposium was something unusual. “There was scepticism among our professors and fellow students, as well as government and private sector representatives, who thought, ‘if students went to the streets with stones in their hands and lit fires, why would they suddenly be looking for dialogue?’” Schürer recalls. “We had to do some intense effort to convince them that this was a serious approach. And then we were able to generate interest.” Schürer’s founding role was celebrated by several speeches, including by former German President Horst Köhler. In a recorded video message played on a screen, Köhler praised Schürer for his “commitment and engagement” and called for today’s younger generations to “respect what previous generations have accomplished but still have the courage to realise their own ideas”. To that end, organisers also announced a Monika and Wolfgang Schürer Award to honour promising cross-generational initiatives every year from now on, of which the two namesakes were the inaugural recipients.

As the St. Gallen Symposium goes into its second half-century, alumni say, maintaining this platform of dialogue will be a challenge requiring constant effort from future organising committees. For Sutter, the ISC can always be even more proactive in inviting and including diverse voices, but the structure of the committee, each year composed of a new, younger generation of students, gives him confidence: “this is what allows us to always maintain new impulses and what allows the St. Gallen Symposium to remain at the cutting edge”.

A Message to Friends of the St. Gallen Symposium 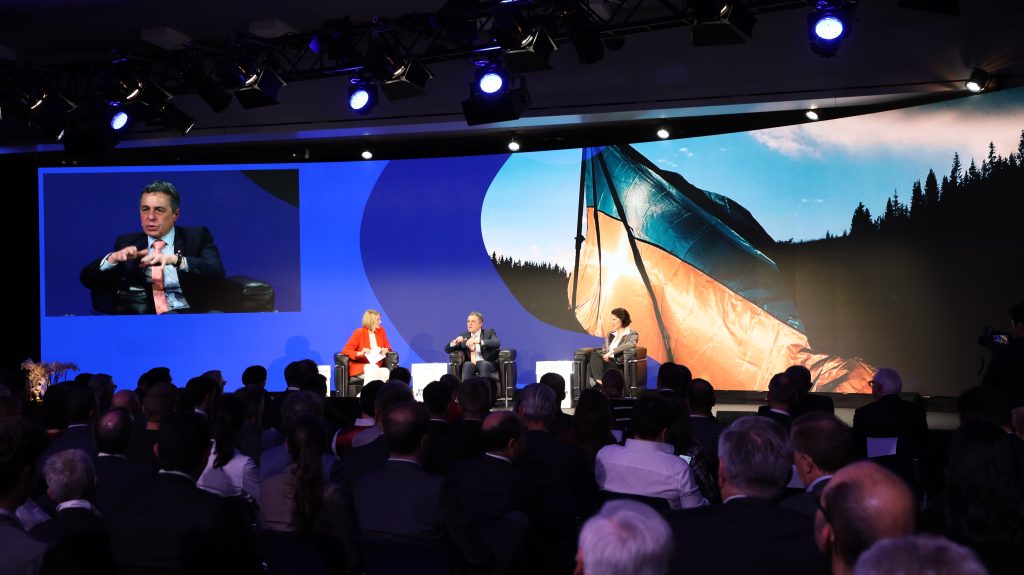 “The World Does Not Remain the Same”